The Red Rock Corridor Commission has made a recommendation for the corridor’s bus rapid transit route and is seeking feedback on the route and station locations for the project. 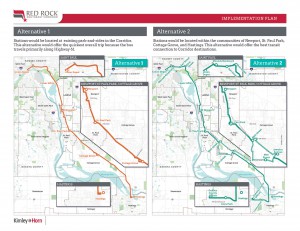 On December 2nd the Commission unanimously recommended Route Alternative #2 as the most efficient manner to server the southeast metro communities.

Washington County Commissioner Karla Bigham is confident in the recommendation of the Commission. “It was with great thought and consideration that we have come to this recommendation,” said Bigham. “We feel route Alternative #2 best serves the needs of the Red Rock Corridor.”

The recommended route will provide convenient access to the largest number of riders, offers the lowest operating cost per rider, serves the most jobs in relation to the station locations, and stays true to the overall vision for transit in the southeast metro.

“There is still much work to be done,” Bigham added. “But this is an important and exciting step for the future of transit in the southeast metro. We’re looking forward to public feedback and continuing work on the Implementation Plan to bring bus rapid transit to the community.”

After the public comment period, the Red Rock Corridor Commission will select the final route and transit locations and complete an implementation plan. The plan is expected to be completed in spring 2016 and include ridership forecasts, service plans, capital and operating expenses, and station area planning.