This work is being updated as part of the Implementation Plan in order to assess the market driven potential for development based on bus rapid transit.

The proposed transit station would be located at the former Knox Lumberyard, near the intersection of U.S. Highway 61 and I-494. Revised concept plans for station area include mixed-use development with commercial and office space as well as residential development near existing residential neighborhoods. Future development would provide a stronger connection from the station area to the Mississippi riverfront. A 450-stall parking facility to accommodate commuters is also a part of the long-term plan. Maxwell Avenue would become the new “face” of Newport with new development, green space, a public plaza, and streetscape improvements.

Decisions regarding residential and business development surrounding the station site will be guided by the study completed in 2011, and coordinated by city staff and local elected officials. 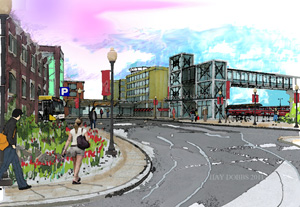 Leave a comment for the Red Rock Corridor regarding the station planning for the Newport Transit Station.